Tom Bernhardt has been a North Dakota Grain Growers Association (NDGGA) director for as long as he’s been a member. He and his wife, Tamie, operate a five-generation crop and cattle ranch near Linton and Tom purchased from his parents in the early ‘90s.
“My only goal was not to lose what Mom and Dad started. I was not going to be a statistic. Tamie and I, we kept our noses to the grindstone, but we loved it. It’s dedication to the work and it’s gotta be smart work,” Tom says.
Also motivating Tom was his own lingering concern that no matter how hard he worked, other family might not think his work was smart work.“I have nine siblings and they were all married so, to me, I had 18 sets of eyes watching me. I didn’t want to let my parents down, so I didn’t want to let (other family) down either.”
Tom let no one down. Instead, he enlightened someone special to the struggles and joys of farming, Tamie, who grew up on a farm, but says she did not indulge until tying the knot with Tom.
“After we got married there was a need for another person. Tom was patient, he was a good teacher, and I took it all in.”
Tamie took in a lot, constantly takes in more, and engages it every day.
“There’s very few wives involved to the point Tamie is. She knows it all and she’s so good at it. She’s been indulged and knowledgeable,” Tom says.
Operating Bernhardt Farm together strengthens Tom and Tamie’s mutual passion for its unending success. As a result, people around Linton know Tamie is not only Tom’s wife, she’s a farmer who just happens to be a woman.
Farm and Ranch Guide spread the word by naming Tamie Country Woman of the Year in 2005. The couple has been recognized in many prominent venues including NDSU Harvest Bowl 2018.
Tom and Tamie are confident that their son, Austin, will take Bernhardt Farm to the next level.
Likewise, Tom believes future farmers have the talent and collective potential to elevate the agriculture industry, but he has some advice.
“For a young person, if you don’t have it in your heart and your head that this is a lifestyle that you want, to make a living off the land, you will have problems. You have to realize you’re harvesting sunlight and water.”
Tom admires NDGGA’s clout and credibility in essential arenas. He says NDGGA’s influence as a voice for agriculture increases continuously because it directly engages and educates those seemingly committed to taking mass-production agriculture down. The annual E-Tour exemplifies NDGGA’s effectiveness.
“We invite personnel from the Environmental Protection Agency and other entities to North Dakota where NDGGA shows them what we do, how do it, and why we do it. When attendees leave, they’ve learned a lot,” says Tom, who also says he, too, learns a lot.
“NDGGA has helped me understand how you can engage with people to win them over and to listen when you want to win them over, not just bully them.”
Tom continues by explaining NDGGA provides much more than a voice in agriculture policy.
“The group of people that have been on the board; past, current, and those coming up, what a great bunch of people. Everybody has their own little talent. It’s just amazing and a pleasure to work with so many bright leaders and talented farmer friends.”
Tom and Tamie remain grateful to each of their five children ’s immense contributions to the farm’s success. Only Austin has chosen agriculture as a career, but Tom and Tamie have everlasting pride in all five’s career achievements.
This enduring spirit embodies something Jessie Veeder wrote, and the entire Bernhardt family takes to heart: The family farm and ranch is a special place, not just for the ones who live there now.
A Bernhardt family member laminated that sentence and mailed a copy to Tom who keeps it in his pocket and remembers when making decisions as an NDGGA director.
To learn more about the North Dakota Grain Growers Association and how to become a member, please visit www.ndgga.com. 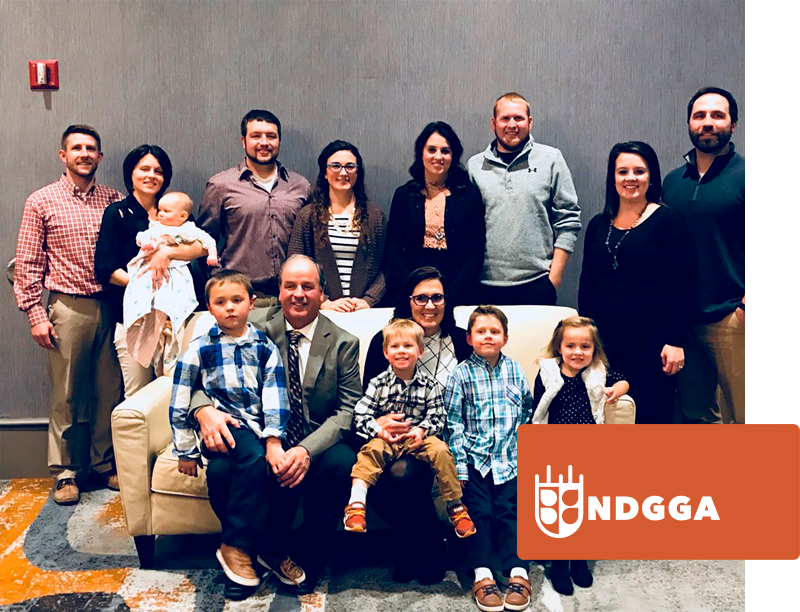